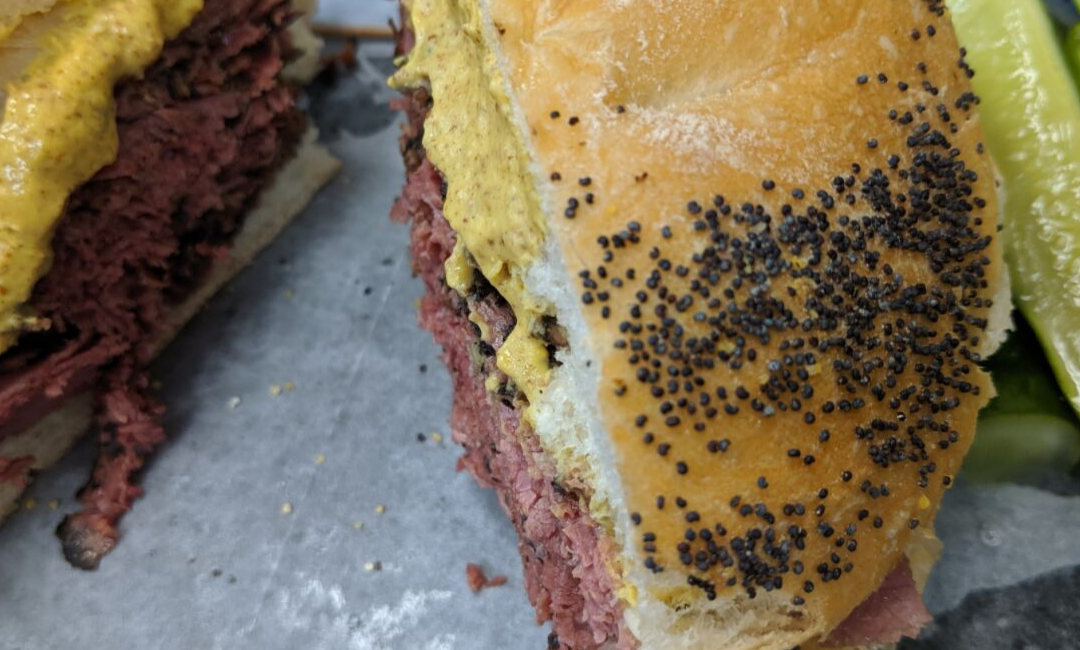 A Quasi-Scientific Hot Pastrami on a Kaiser Roll

There’s always been a lot of debate about poppy seeds and whether their ingestion can or will cause a positive result on an opiate panel; many of us have even seen the famous episode of the Seinfeld TV show where Elaine was almost fired due to a positive drug test caused by poppy muffins. There have been plenty of scientific papers published where sophisticated laboratory equipment is used to determine the opiate make-up of poppy seeds, and their concentrations. But what does really mean to those of us performing drug tests every day? Well, I wanted to take slightly-less-than scientific approach to see what this looks like in the real world. I did take some proper steps to ensure that my results were not completely unscientific (waiting a week between attempts as to not have any residual form the previous, for example).

So let’s see what I found…

My first go was at a newer local NY Deli near the office that I’ve been meaning to try. I went for lunch and had a poppy bagel with tuna salad (lightly toasted, since you asked); there were not quite as many poppy seeds as on the Kaiser bun in the photo above. My first specimen was an hour after eating and came up negative on one of our MOP300 panels. The next specimen was 2 hours after that and was positive on the MOP panel. My next specimen was about 3 hours after that and was back to negative. The laboratory confirmatory results are as follows:

As you can see, this is just barely above the cut-off for the Opiate panel. Both Codeine and Morphine present, more than likely not as metabolites, but as the parent alkaloids from the poppy seeds.

My second attempt was at a local favorite here, this one has been in town since 1974! The bottom of the bun had essentially no seeds, so just what you see pictured. My first specimen was 2 hours after eating and came up positive. My second specimen at 6 hours after eating was also positive. My third specimen at +9 hours was also positive. Unfortunately, that brought me to bedtime – next test will be in the morning so I can have a full 12+ hours awake after eating! Lab results for this group as follows:

In this case, we see that the instant test can sometimes react even when the concentration is below the threshold. This is a common occurrence and is probably regarded as one of the biggest weaknesses of instant tests as a whole (be sure to attend my webinar next month for more on this). Looking at the Codeine/Morphine ratio, we can see that these poppy seeds have a different make-up then the ones from the previous week.

Week 3: Poppy Seed Bagel (With a “Schmear” of Cream Cheese)

My third round was at a national bagel chain (Einstein’s). I do like a lot of poppy seeds on my bagel, so I was familiar with their offerings. I made sure to eat this for breakfast this time, to give me more waking hours in which to provide specimens. Still only poppy seeds on the top, but they almost completely cover the surface of the top of the bagel; so probably nearly twice as many as you see in the picture of the bun. My first specimen was at about 90 minutes after eating and was positive. My second specimen was at about 4 hours after eating and it was also positive. My third specimen was at 6 hours after breakfast and still positive. My fourth specimen at 7.5 hours was still positive. I finally produced a negative specimen at the 10 hour mark. Lab results for this group as follows:

This one is interesting as once again the alkaloid make-up differs from either of the previous 2 weeks; in this case we don’t have any Codeine present. Also, we see again the instant test is giving a positive where the concentration is well below the cut-off. It is worth noting that the instant tests used for this entire experiment were not part of our standard catalog – we had a bunch of samples from other manufacturers that were probably going to expire if we didn’t make use of them, and this seemed a perfect opportunity!

So, we can clearly see that it does not take an inordinate amount of poppy seeds the trigger a positive test result. Also, contrary to popular belief, there would be no way for a laboratory to make the determination (at least on most of these results) that the positive was from poppy seeds versus Morphine and/or Codeine use. Many of my judicial customers (probation/parole, drug court, etc.) are able to have their participants sign something acknowledging that consumption of poppy seeds or other poppy foods constitutes a violation – this is to avoid any conflicts down the road. Some of my non-profit addiction treatment facilities who rely on food donations, must sadly decline any donations of poppy foods. So, there are ways to minimize the chances for this to become an issue, but it isn’t the same for everyone, and it isn’t always easy!

Some other things to consider: